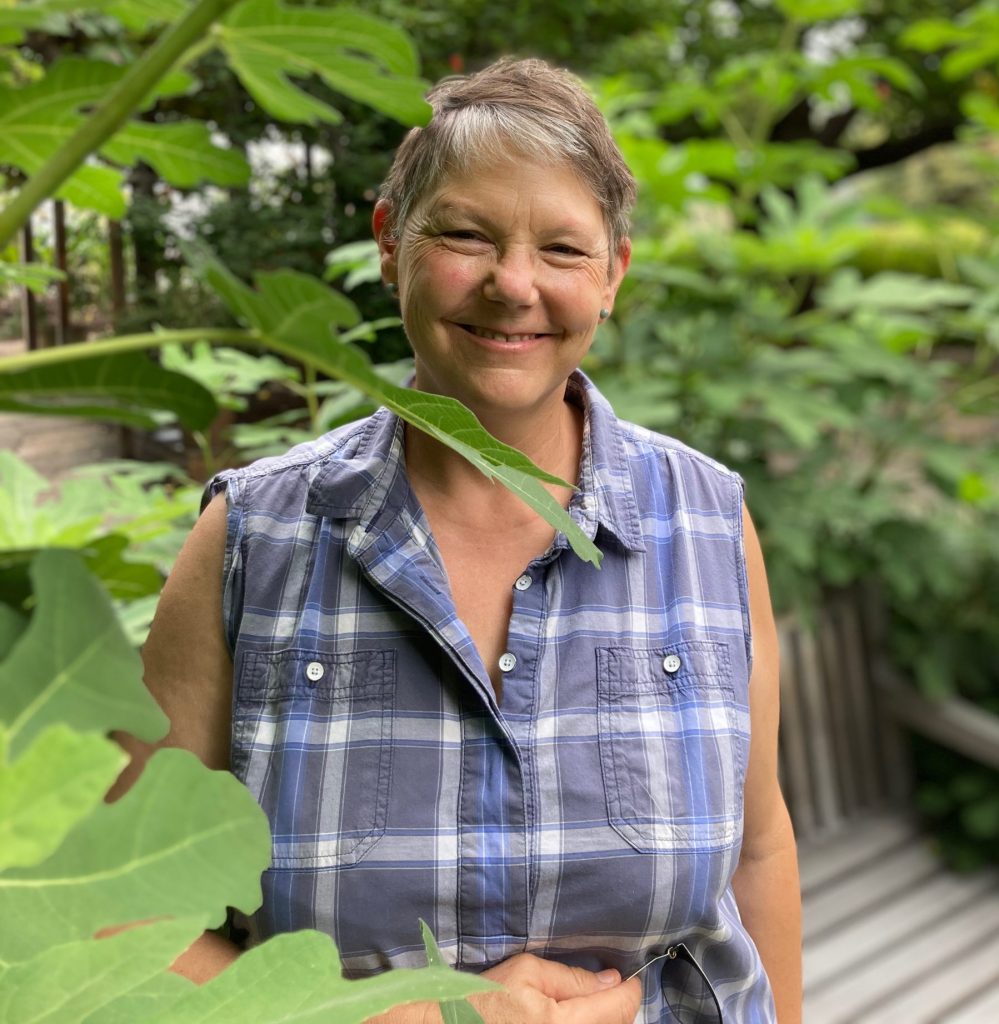 The Sustainability Champion series highlights the people forging garden and sustainability pathways in Denver Public Schools.  Gigia is among the pioneer garden champions that planted, nurtured and tended the first gardens and student gardeners and chefs in DPS.

Born in Marin County, California and raised in Santa Cruz, Gigia earned degrees in French language and Library Science before turning her focus to graphic arts and type-setting. As an adult, Gigia began teaching cooking classes at Colorado Free University, Cooking School of the Rockies, Alfalfa’s Market and Aurora Parks & Rec. to share cooking skills and the importance of our Food-Earth connection.

Gigia has always been drawn to share the experience of gardens and cooking, sharing: “Humans need, at their Essence of Being, to directly use their body and hands to find their Earth-Body Connection … to forge our human relationship to Nature.”

When her children began attending Stanley British Primary School, Gigia engaged the students with cooking and gardening.  “I started a garden at my kid’s school.“

She soon met Andy Nowak as she became involved in the cooking classes and garden at Steele elementary, where “Every grade level was involved in garden rituals that they did every year.  The 5th grade teachers, when they studies Native Americans, had a giant tribe feast to celebrate Native American food culture from tribes across the country and another teacher would do a Chinese cultural feast.”  On seeing the need for students to learn cooking and nutrition skills, Gigia partnered with Andy Nowak to develop the Slow Food Denver Seed to Table Program.  The Slow Food leadership team started their first garden sites and connections at Steele, Whittier, Bromwell and Fairmont.  Soon, Fairmont became the first Denver Urban Gardens and DPS community garden partnership.  Gigia founded the garden at Eagleton Elementary with Learning Landscapes, forging a new partnership that would add garden learning spaces across DPS.  Along with Andy Nowak, she mentored parents to be garden leaders, experts and advocates.  Quickly Gigia and Andy realized they needed advocates in the schools beyond volunteers and parents. At Eagleton, Gigia created the Wellness in the Garden program for schools to best use garden spaces.  Twice a week, students would learn lessons in the garden in the optional summer program in a partnership with Denver Health.  Lessons learned here became the seeds for creating curriculum and developing recipes for Slow Food. “We realized we needed to train and mentor parents to be the garden leaders.”

We eventually created the Seed to Table Alliance with about 60 schools.  We tried to support them however we could with monthly workshops, cooking classes and cooking equipment.  We volunteered our time and Andy began running the national Slow Food Garden Network based in Denver. “When Denver Urban Gardens built the Morey Middle School community garden … it was so close to my house it was so easy to be involved and keep it going … I did the after school program there and developed curriculum for older kids.”

She worked with students at Morey for five year and later became the DUG Community Garden Leader for Morey.  While working with DUG, Gigia wanted to become an artist, taking up encaustic painting. Gigia’s advice for teaching in the garden:  “Practice not having expectations,”  allow students to observe and experiment without an end product in mind, in turn, they will discover the lessons and connections on their own.  Check out Slow Food School Garden Curriculum for more cooking and garden resources.